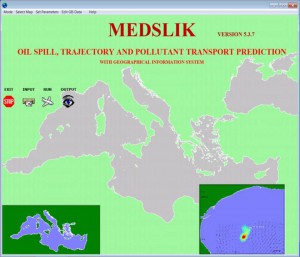 MEDSLIK is an oil spill and trajectory 3D model, developed and implemented at the Oceanography Centre of the University of Cyprus (OC-UCY), that predicts the transport, fate and weathering of oil spills and the movement of floating objects in the Mediterranean, the Black and the Baltic seas.

The MEDSLIK incorporates the evaporation, emulsification, viscosity changes, dispersion in water column, adhesion to coast. The transport of the surface slick is governed by currents, waves (Stoke’s drift) and wind while its diffusion is modelled by a random walk (Monte Carlo) model. Oil may be dispersed into the water column by wave action but dispersed oil is moved by currents only. The oil is considered to consist of a light evaporative component and a heavy non evaporative component. Emulsification is also simulated, and the viscosity changes of the oil are computed according to the amounts of emulsification and evaporation of the oil. The pollutant is divided into a large number of Lagrangian parcels of equal size. At each time step, each parcel is given a convective and a diffusive displacement. Mechanical spreading of the initial slick is included with fate processes included in the model as the evaporation of the lighter oil fractions and the mixing into the water column by wave action and emulsification. 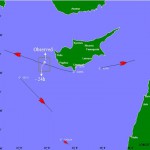 Oil viscosity changes and beaching on the coast and absorption depending on the coastal type. MEDSLIK covers the Mediterranean sea, the Levantine basin, the Black Sea and the Baltic Sea, but it can be used for any user-selected region in the world if the appropriate map, bathymetry and forecast files are provided.

An automatic version of MEDSLIK (internally known as AutoMedTrack) is used without any operator intervention, along with ASAR satellite data for short, 24 hours forward and backwards predictions. The model has been used with satellite images, MODIS and ASAR during the Lebanese oil pollution crisis, in summer 2006, which is considered the biggest oil pollution in the Eastern Mediterranean so far.

Recently, the Oceanography Center has launched the online version of the MEDSLIK system

There are no upcoming events.